In the 0.3 line of Redcar, one of my top goals is to make writing plugins both easy and awesome. I believe that people will enjoy writing plugins more if the process is familiar to them, and makes use of skills they already have.

Here’s one of the APIs we’re developing that will let you write plugins using web technologies. 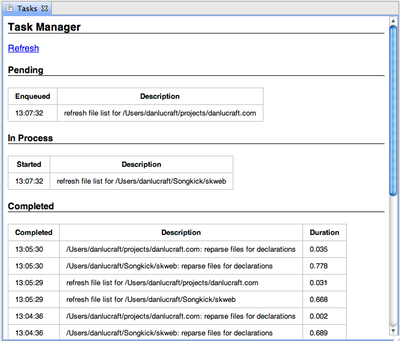 The HtmlTab embeds a browser into Redcar, so you can display information using HTML and CSS.

The screenshot shows the task manager, which is an example of an HtmlTab.

So far so normal. Many editors and IDEs use embedded browsers like this in order to preview HTML.

Textmate makes extensive use of HTML windows to show information from commands, and this has been terrific for Textmate because it allows users to write commands that output attractive HTML, and lots of people have done that.

But the HtmlTab in Redcar can do much more than just display static HTML. Redcar supports two-way communication between JavaScript in the browser and Ruby in the editor.

Here’s the implementation of that Task Manager. The controller defines a title that goes into the tab. The index method is like a Rails action, which is automatically run and the result sent for display in browser widget in the HtmlTab.

The cancel_task method is like an Ajax action (that in this case doesn’t return anything to the browser.) It’s job is to respond when the user clicks on a cancel Task link in the Tab.

In the index.html.erb file, which contains Erb that renders the page from the instance variables in the index action, there is also a snippet of JavaScript:

So we’ve now written a Task Manager for Redcar without having to use a single line of GUI code!

NB. The render method is not implemented yet, at the moment you have to manually process the ERB.